The Devil’s Work by Mark Edwards

The Devil’s Work was an enjoyable reading experience with a clever plot and interesting characters.

I seem to keep choosing books that have a dual narrative, past and present events being woven together to create mystery and questions a-plenty. It’s not on purpose, but it’s such a common style that I’m finding it hard to find a book that doesn’t have this! Don’t get me wrong, it is something I like and it worked incredibly well here, but with my next book choice, I’m hoping it doesn’t have this because I’m getting a bit fed up with this concept. (For now).

Mark Edwards uses clear, concise language that tells a quite complex tale that I could follow without any confusion. Sometimes these multiple time lines in books muddle up my brain and I often find I’m back-tracking to help boost my understanding. That was not the case here, Edwards created brilliant characters that I could clearly visualise, whether they were in present day or past.

Only a three star rating though, well, let me explain. I think I’m reading too many psychological thrillers at the moment. It’s one of my favourite genres and I’m becoming rather difficult to please. I’m also getting too good at predicting outcomes, hidden agendas, red herrings and sussing out the unreliable narratives. I’m looking for more WTF’s and, I hate to say it, but I’m getting a little bit bored of this genre!! 😮

The Devil’s Work is the first book I’ve read by this author and I will undoubtedly read more from him in the future based on my enjoyment levels.

Overall, a good, but sadly, not gripping read.

Thank you to the author, Mark Edwards, the publisher, Thomas & Mercer for the opportunity to read this in exchange for an honest review via NetGalley.

Kiss Me, Kill Me by James Carol

I tend to read a lot from the psychological thriller genre, I enjoy books that get right into my head and mess it up a bit with twists and turns and WTF’s.

Kiss Me, Kill Me was an enjoyable read, the first half being it’s better half. As the story progressed, I felt that it went off on an unexpected tangent, which kept my interest piqued all the way through to the conclusion, but at times, it did get a bit far-fetched for my liking.

The characters behaviour and reasonings were just bordering on unbelievable. Putting myself in Zoe’s shoes, the main protagonist, I felt that her thought processes and decisions didn’t properly reflect the sheer seriousness and intensity of the situation. She was a bit wet behind the ears, shall we say.

I also found that the dialogue didn’t have a huge amount of depth, making the characters undeveloped and slightly uninteresting. The repetitive use of ‘keep you safe’ started to get on my nerves after I’d read it for the tenth time.

Now, it sounds like I’m properly dissing this book, but rest assured, I most definitely am not. As I said at the start of my review, I enjoyed reading this. I REALLY enjoyed reading this. These kinds of thrillers are pouring out all over the show lately, and I’m a tough reader to please in this genre, because I feel like I’ve read it all before.

Kiss Me, Kill Me was different in that it’s unusual spiral of events were unexpected and never have I come across a psycho-thrill that went off on such a crazy-assed tangent! For that reason alone, my brain was getting a good old mashing that was keeping me turning those pages.

I’d like to thank the publishers Bonnier Zaffre for sending me an advanced readers copy of this book in exchange for an honest review. 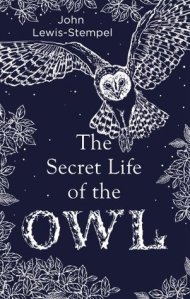 The Secret Life of the Owl by John Lewis-Stempel

I dedicate this review to my dear Mum.

The wisest owl of all.

This could be one of the hardest reviews I’m ever likely to write, and the reason is nothing to do with this perfect little book.

When I was growing up, I was surrounded by all things owlish. Pictures on the wall, ornaments here and there, owl clocks, owl crockery. You name it, we had the owlish version!

My Mum was an owl fanatic! And, suffice to say, it rubbed off on me big time.

For my birthday, one of my other favourite humans ever, my partner, bought me this little gem, and I was delighted. Little did I know, but this beautifully written book conjured up a whole host of feelings that I did not expect.

At just 96 pages long, John Lewis-Stempel has produced something that I shall treasure forever. It doesn’t just contain lots of facts and figures about this truly wonderful bird, he also includes the historical side of all things owl, the myths and legends of days gone by, and, the best bit of all? Poetry. Owl Poetry.

Near the beginning the author included the poem by Edward Lear, The Owl and the Pussycat. This poem helped me learn to read! This poem was read again and again at bedtime. With my Mum.

Eventually, I’d learnt how to read it perfectly, write it perfectly and recite it faultlessly. And unbeknownst to me, it was in this book. I started to read it, and couldn’t see the words for my tears.

Once I’d gathered up my senses and tissues, I read on, discovering the weird and wonderfully fascinating secret lives of a creature that has been with me all my life.

This book is stunning. I’d give it fifty million stars if I could. And I know that one of those stars, the brightest one, is my dear Mum. 💗

The Hoarder by Jess Kidd

Two weeks it took me to read The Hoarder by Jess Kidd. Two weeks of beautiful, poetic writing, which ambled along at a pace slower than I normally would like. That said, the speed at which this story unfolds was exactly how it should be. I devoured every sentence, re-read many paragraphs, I wasn’t itching for a conclusion or big reveal, I was deep in the moment, sucked in by incredible writing.

I loved everything about the story, the writing style, the characters, the humour, the sadness and poignancy. Whilst reading, I felt as though I was transported to Bridlemere, the aromas of a once grand mansion seeped into my senses, the quirky characters had my undivided attention, and the paranormal elements added an unusual and often amusing twist.

Sometimes the wind dropped down and hid behind the dunes, sometimes it sent playful handfuls of sand skipping. Sometimes it raised colossal storms to scour your arse all along the strand.

I’m not entirely sure whether I’ve read anything with Irish protagonists before, if I have, it’s gone unnoticed or forgotten. The sometimes slightly crass dialogue brought smirks and smiles, just breaking up the flow enough to give it an edge, perfectly placed, no profanity for the sake of it.

The Hoarder is faultless, I am finding it difficult to review in all its perfection. I didn’t read too much about it prior to starting it, and went in blind. I just had a funny feeling it would blow me away. And it did just that.

Huge thanks to the author, Jess Kidd, the publisher, Canongate Books Ltd and NetGalley for the opportunity to read this in exchange for an honest review.

Vell, vat vas a lot ov vun! Or, in non-Zenka style, that was a lot of fun!

Zenka is a Hungarian pole dancer and she works at a club owned by Cockney gangster Jack Murray. Now, it turns out that Jack has a son he’s desperate to get to know, to be a father to, and Zenka is going to help him with this rather unconventional mission.

She’s going to befriend Nicholas, Jacks long lost son, possibly seduce him in the process, and get him toughened up to be the son of a gangster. A man to fear.

What follows is a story that had me absolutely creased up laughing many, many times. To describe the setting, characters and plot, I would say it was reminiscent of something along the lines of Lock Stock and Two Smoking Barrels.

Zenka is a kind hearted, sassy woman and she does her best to get father and son reunited, but it’s not going to be easy. And, oh blimey, she has some pretty crazy ideas!

Nicholas can’t believe his luck when Zenka enters into his life, a life that has changed dramatically since he came home and discovered his flat had been vandalised.

Alison Brodie has written a super funny and touching story about the perils of crime, a families past, and how not to dispose of a corpse or two. I’m finding it tricky to give this book a one genre slot, it is predominantly a crime thriller, but it has romance and gritty British humour in the mix too.

I loved every character in this book, they are all so very different from each other. Zenka’s voice is mainly heard in letter format every few chapters or so, her Hungarian accent being written phonetically so the reader can really hear her attempt at speaking English. This took a bit of getting used to, but after a few chapters, it vorked incredibly vell.

Jack is a typical Cockney gangster who’s use of rhyming slang and ‘wide-boy’ attitude made him likeable but I was initially wary of him. He’s a hard man, but as the story progresses, his softer side emerges as his history is revealed and I really warmed to him.

The best thing about this book for me, was the relationship between Nicholas and his flat mate Jason. These two had me in stitches with their hilarious bickering and witty one-liners. When things start to get REALLY complicated, and these two find themselves in the middle of something they shouldn’t be, the authors choice of dialogue and the character reaction was superb. At one point I literally had tears rolling down my cheeks because the whole scenario was so hysterical! It just tickled me pink!

This read ticked many a box for me, it had a few violent and aggressive scenes, balanced out by a clever storyline with a few plot twists along the way, a little touch of romance, and a lot of laugh out loud moments. I thoroughly enjoyed it, I’d like to read more by Ms Brodie.

My only complaint is I’m not a big fan of the cover art. The author has told me she’s going to be changing it soon, which I’m glad for because I’m not keen on seeing a characters clear photo/picture on a book cover. I want to visualise how they look in my own way and not have a face already given to me from the start. Characters, for me, kind of materialise as I’m reading about them. Chapter by chapter a characters features start to form in my minds eye, and usually by about half way, I’ve established what they look like. But apart from that minor moan, I thought Zenka was a hoot!

I’d like to thank Alison Brodie for sending me an electronic copy of this to read in exchange for an honest review. It was a pleasure.